Saved Searches Advanced Search
Mail delivery and curbside pickup are now available by appointment only on Tuesdays and Thursdays. Find more information on curbside services here: https://www.ssf.net/Home/Components/News/News/7735/1809. Access resources online at www.ssf.net/library or email us at ssfpladm@plsinfo.org. For other questions, please  call (650) 829-3860 and leave a message. Thank you for your patience and cooperation as we all do our part to address this global health crisis.
Print 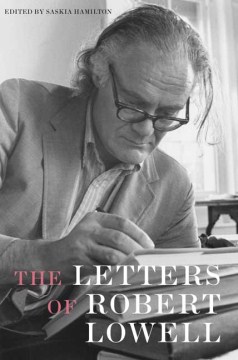 The Letters of Robert Lowell

Baker & Taylor
A collection of personal letters offers a glimpse inside the mind of a legendary man of letters, as well as a study of the evolution of Lowell's poetic work, personal life, manic-depressive illness, political sentiments, marriages, and friendships with other writers.

Over the course of his life, Robert Lowell impressed those who knew him by his "refusal to be boring on paper" (Christopher Benfey). One of the most influential poets of the twentieth century, Lowell was also a prolific letter writer who corresponded with many of the remarkable writers and thinkers of his day, including Elizabeth Bishop, Edmund Wilson, Robert Kennedy, Ezra Pound, William Carlos Williams, T. S. Eliot, and Robert Frost.

These letters document the evolution of Lowell's work and illuminate another side of the intimate life that was the subject of so many of his poems: his deep friendships with other writers; the manic-depressive illness he struggled to endure and understand; his marriages to three prose writers; and his engagement with politics and the antiwar movement of the 1960s.

The Letters of Robert Lowell shows us, in many cases for the first time, the private thoughts and passions of a figure unrivaled for his influence on American letters.

Baker
& Taylor
A collection of personal letters by the acclaimed American poet offers a revealing glimpse inside the mind of a legendary man of letters, as well as a study of the evolution of Lowell's poetic work, his own personal life, the manic-depressive illness that marked his world, his political sentiments, his marriages, and his friendships with other writers.