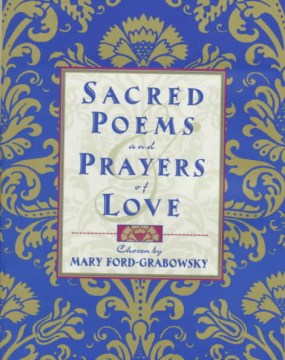 Sacred Poems and Prayers of Love

Random House, Inc.
Sacred Poems and Prayers of Love is more than a collection of poems for a "beloved." It includes poems and prayers for friends, neighbors, family, the world around us, and God, in addition to poems for a "romantic" love. Chapters include "Love for Life and the Beauty of the World," "Love for a Beloved," "The Art of Spiritual Friendship," "Family Love," "Loving Another as Oneself," "Love in the Valley of Suffering," and "Love of the Holy One."

The book's comprehensiveness ties perfectly into the current trend toward spirituality in everyday life, and the importance of recognizing and celebrating love in all its manifestations.

The collection includes approximately 200 prayers from around the world and the last 5,000 years. In addition to prayers from each of the five major religions, the author has included Native American, Celtic and African poems and prayers, and prayers by contemporary religious leaders that have been written or translated specifically for this volume.

Blackwell North Amer
Sacred Poems and Prayers of Love celebrates love in all its incarnations: love for family, lovers, friends, neighbors, God, and the world around us. Drawn from a variety of religious traditions - Buddhist, Hindu, Islamic, Jewish, and Christian - and from many cultures, including African, Celtic, English, French, Indian, Irish, and Native American, this is a diverse gathering of the most beautiful declarations of love made through the ages by people around the world. There are some familiar prayers, whose timeless words have been handed down for thousands of years, and many that have never been published before. Several offerings are here translated into English for the first time, others are poems written specifically for this volume by some of the world's foremost contemporary religious leaders.

Baker
& Taylor
Ranging over many religions and the world's history, a gift book collection of more than two hundred poems and prayers, many of which appear in English for the first time, celebrates the power of love in all its forms.