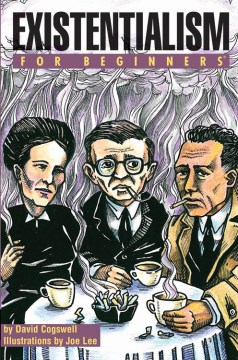 Random House, Inc.
Existentialism For Beginners is a lighthearted romp through the history of a philosophical movement that had broad-reaching influence on Western culture, politics and the arts during the period of mid-19th century through the late 20th century, and still exerts influence in the 21st century. Tracing its beginning with close-up views of seminal 19th century writers like Kierkegaard, Dostoevsky and Nietzsche, Existentialism For Beginners follows the trail of existential thought and literature through 20th century German philosophers Jaspers and Heidegger, and finally through to the flowering of the movement in Postwar France brought forth by Jean Paul Sartre, Albert Camus, Simone de Beauvoir and beyond.
With dazzling, gritty illustrations Existentialism For Beginners takes an affectionate, good-humored look at a style of thinking that, while pervasive in influence, has often been seen as obscure, difficult, cryptic and dark. Existentialism For Beginners helps to draw the movement’s many diverse elements together to create a palatable introduction for people who have always had difficulty defining or understanding existentialism, and an enjoyable historical review packed with richly fascinating quotes from existentialism’s most notable purveyors for those who are already appreciators of existentialism.

Existentialism For Beginners is an entertaining romp through the history of a philosophical movement that has had a broad and enduring influence on Western culture. From the middle of the Nineteenth Century through the late Twentieth Century, existentialism informed our politics and art, and still exerts its influence today. Tracing the movement's beginnings with close-up views of seminal figures like Kierkegaard, Dostoyevsky and Nietzsche, Existentialism For Beginners follows its intellectual and literary trail to German philosophers Jaspers and Heidegger, and finally to the movement's flowering in post-World-War-II France thanks to masterworks by such giants as Jean Paul Sartre, Albert Camus, Simone de Beauvoir, plus many others.

Illustrations throughout -- at once lighthearted and gritty -- help readers explore and understand a style of thinking that, while pervasive in its influence, is often seen as obscure, difficult, cryptic and dark. Existentialism For Beginners draws the movement's many diverse elements together to provide an accessible introduction for those who seek a better understanding of the topic, and an enjoyable historical review packed with timeless quotes from existentialism's leading lights.