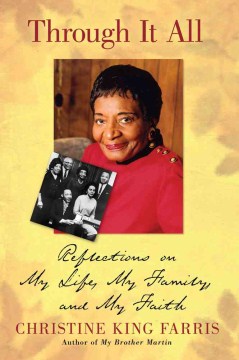 Reflections on My Life, My Family, and My Faith

Baker & Taylor
An intimate portrait of Martin Luther King, Jr., by his only surviving sibling shares an inside perspective on his childhood years, which were marked by their mother's murder and youngest brother's mysterious drowning; in an account that reveals the author's beliefs about her brother's extraordinary accomplishments.

Baker
& Taylor
The older sister of Martin Luther King, Jr., provides a portrait of her family and childhood and the values, abiding faith, and community involvement that shaped her and her brother's lives and led to a stand against racial prejudice and injustice.

Through It All, a unique, intimate portrait of the Kings, one of America's most extraordinary families, is written as only a beloved elder sibling of Dr. Martin L. King, Jr., could -- with insight, tenderness, and wisdom.

Christine King Farris, the only sister of Dr. King and his brother, A.D., is the surviving member of the family that together stood for the rights of all Americans at the forefront of the civil rights movement. They come from a long line of African Americans in the South who combined education and conviction not only to survive against the odds but to make life better for themselves and those around them, especially the poor. She offers a rare opportunity to learn more about the man behind the myth -- as she describes, Martin Luther King was "no saint, ordained as such at birth. Instead, he was an average ordinary man, called by a God, in whom he had deep and abiding faith, to perform extraordinary deeds."

The revelatory glimpses into her childhood with Dr. King are heartwarming. Her memories of, and insight into, her family's early years, including the brutal murder of their mother in church and the drowning of their youngest brother, are startling.

Ms. Farris has led a fascinating life, not only as the sibling of one of America's most internationally celebrated leaders, but in her own right as a wife and mother, activist, and career educator who has put in more than fifty years of service at Spelman College in Atlanta, Georgia. Her children's book, My Brother Martin, was described by Kirkus Reviews as "a window to show Martin as a small boy in a loving extended family."

Through It All, Christine King Farris's first memoir, opens doors to let readers of all ages into her life, her family, and the faith that allows her, in the ninth decade of her life, to still stand for all the principles that make America great.