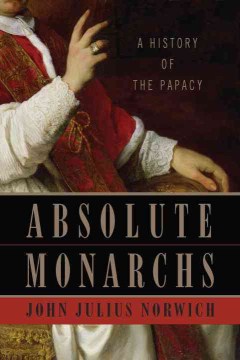 A History of the Papacy

“Renowned historian Norwich offers a rollicking account of the men who held the papal office, their shortcomings and their virtues, and the impact of the papacy on world history. He conducts us masterfully on a tour of the lives of the popes from Peter to Benedict XVI. . . . Entertaining and deeply researched, Norwich’s history offers a wonderful introduction to papal lives.”
—Publishers Weekly

“Historian, travel writer, and television documentarian Norwich presents an excellent, often surprising history of that 2,000-year-old institution….he focuses on political history as he traces the evolution of the papacy as an institution, while at the same time providing entertaining profiles of the most historically significant popes….An outstanding historical survey.”
—Booklist

“When Norwich writes, I read; this member of the House of Lords is a notable and engrossing historian, perhaps best known for his monumental study of Byzantium. Here he offers a history of the nearly two-millennia-old papacy that should be popular with many readers.”
—Library Journal

“A spirited, concise chronicle of the accomplishments of the most noteworthy popes. . . . Norwich doesn’t skirt controversies, ancient and present, in this broad, clear-eyed assessment.”
—Kirkus Reviews

With the papacy embattled in recent years, it is essential to have the perspective of one of the world’s most accomplished historians. In Absolute Monarchs, John Julius Norwich captures nearly two thousand years of inspiration and devotion, intrigue and scandal. The men (and maybe one woman) who have held this position of infallible power over millions have ranged from heroes to rogues, admirably wise to utterly decadent. Norwich, who knew two popes and had private audiences with two others, recounts in riveting detail the histories of the most significant popes and what they meant politically, culturally, and socially to Rome and to the world.

Norwich presents such brave popes as Innocent I, who in the fifth century successfully negotiated with Alaric the Goth, an invader civil authorities could not defeat, and Leo I, who two decades later tamed (and perhaps paid off) Attila the Hun. Here, too, are the scandalous figures: Pope Joan, the mythic woman said (without any substantiation) to have been elected in 855, and the infamous “pornocracy,” the five libertines who were descendants or lovers of Marozia, debauched daughter of one of Rome’s most powerful families.

Absolute Monarchs brilliantly portrays reformers such as Pope Paul III, “the greatest pontiff of the sixteenth century,” who reinterpreted the Church’s teaching and discipline, and John XXIII, who in five short years starting in 1958 “opened up the church to the twentieth century,” instituting reforms that led to Vatican II. Norwich brings the story to the present day with Benedict XVI, who is coping with a global priest sex scandal.

Epic and compelling, Absolute Monarchs is the astonishing story of some of history’s most revered and reviled figures, men who still cast light and shadows on the Vatican and the world today.

Baker & Taylor
A comprehensive history of the papacy by the legendary British historian and author of the three-volume Byzantium series describes the defining relevance of papal authority to the Church, chronicling the unexpectedly violent and colorful historical events that have indelibly shaped the Pope's authority and station.

Norwich gets bogged down in the political context of Europe at times, clearly displays his liberal bias in regards to what actions some popes should have taken, and doesn't define words that a general audience wouldn't know (such as "nuncio"), but this is nevertheless a good, solid history of the papacy. It reveals the popes as human figures working to gain or keep power in a perpetually shifting political landscape, struggling with spiritual, personal, and health-related difficulties.

a galloping read
i particularly enjoyed the references to historical figures that i had read about in other books... ie The Lady Queen, The Swerve

An exhaustive and exhausting study of the entire history of the popes. Be warned that it is primarily a political rather than doctrinal history. You will learn about the competing secular dynasties as well and the muddled history of the Italian peninsula. He is circumspe on the most recent popes. It was a tough slog through the middle ages but hang in.

Oh, what a depressing lineage. Well written, scholarly with an occasional wry comment to make you smile. Thank goodness for separation of church and state!

Very helpful! I was doing a project on the Investiture Contest between Pope Gregory and the Holy Roman Emperor Henry and I definetely found this book helpful when writing my paper! :)

I agree, this book can only skim the surface when tracing the linneage of St. Peter's throne. In any event it is a good introduction to what proves to be a thoroughly engrossing parcel of rogues and the ever evolving role of the papacy on the world stage. Norwich concludes this book with the words if St. Peter were alive today he would be proud of what he sees. I'm not so sure of that.

Norwich is one of my favourite historical authors. Whether it is a history of the Byzantine Emprire, or Venice in the age of the Doges, Norwich creates a accesible narrative full of colourful personages. This time he tackles the long and complex history of the Papacy, and indeed the Catholic Church as well. Not a bad overview or introduction for the casual reader. The actual history is far too complex to be thoroughly covered in 500 pages, but it is a good start.